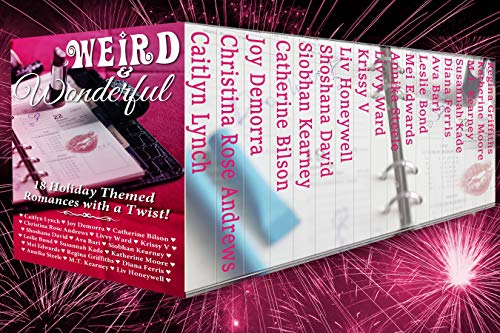 Helmed by USAT Bestselling Author Caitlyn Lynch, 18 authors explore several lesser-known holidays. Featuring sweet country romance and sex in the big city, there’s something for all romance readers. Polar bear plunges. Sexy neighbors. Even a cute shifter or two. This anthology has it all!

Come celebrate the year with us!

Thank you to everyone who made the Weird and Wonderful Holiday Romance into an international bestseller! The anthology has now ended, but you can still find your favorite authors by clicking the links down below!

Taking the Plunge – Shoshana David
Neve loves the Polar Bear Plunge. She expects an icy swim, beach party, and long shower. Until she meets sexy Alex. Will she act on her attraction? Or will she be stuck in the cold?

Phoebe and the Pea – Catherine Bilson
Phoebe’s aghast when she finds the pea in her Twelfth Night cake because not one, not two, but three beans are found by eligible gentlemen! Which will Phoebe choose?

The Boy Next Door – Mei Edwards
While on holiday, Jane can’t escape working. Fortunately, a distraction appears. Toby. The draw is immediate. When push comes to shove, is she willing to take a chance?

A Holiday (or Two) to Remember – Christina Rose Andrews
Grace wants a treadmill, but there’s a sexy obstacle in her way. He’s got abs, arms, and the scariest resting murder face. Is she woman enough to overcome her fears and do this grouch a favor?

The Editor – Siobhan Kearney
Author life isn’t like the movies. At least Sophie’s editor stokes her fantasies. Too bad she can’t graft her editor’s personality onto her sexy neighbor. Or so she thinks.

Easy as Pi – Leslie Bond
It’s Pi Day; someone has to make the pies. That someone is Cassidy, working at his boyfriend’s bakery. But having to make dozens of pies turns Cass’s body into one big knot. Luckily, Bobby’s there to help.

Lip-Locked Besties – Livvy Ward
Ally’s got a broken heart. Chris is a flirt. With the help of an odd holiday, will these besties see what’s right in front of them?

Melting Hearts – Annika Steele
April misses sunny Texas. So what if her sexy neighbor happily scoops heaps of snow off his driveway. If burning a snowman on the equinox will guarantee no more snow, she’s all in.

Wrong Number – Krissy V
Two people are brought together by chance. No one knew how significant two different colored shoes would be.

Naked Attraction – Liv Honeywell
Relaxing in her roof garden, Juliet decides to celebrate World Naked Gardening Day. It’s freeing to bare all. Except she’s not as alone as she thinks.

A Guide to Playing Rich – Ava Bari
Stef and Eli are nobodies. The same cannot be said for their best friends. At a party, the pair are drawn together. There’s one problem: they think the other is a celeb. Can their attraction overcome their misunderstanding?

Finding Pride – Diana Ferris
When Louise meets Fernanda, her life is turned upside down. Finally, she’s free to be herself. But will she let herself fall in love?

Dane’s Redemption – Susannah Kade
Trapped as a bat, Dane has lost hope. On International Bat Night, he’s drawn to Tessa, a descendant of the witch who cursed him. Can they work together to break the spell?

Dear Dolly – M.T. Kearney
Dolly is shocked when instead of her pen pal a con man shows up. Enter PI Jim. He scares off the man and insists on protecting her. Will Dolly accept his help and possibly more?

The Seadog’s Wife – Katherine Moore
Thrown together when cast as the leads in a pirate movie, a pair of formerly married actors realize their divorce was a mistake.

Feral Heart – Regina Griffiths
Candice hopes coming home will be an escape. She doesn’t expect a stray cat or an old friend to complicate things.

Crewel Intentions – Joy Demorra
While the city anticipates upcoming festivities, Vlad, Nathan, and Ursula enjoy a romantic sojourn until an unavoidable event arises along with concerns about Nathan’s attire. Between them, Vlad and Ursula will find a way to get the shirt off his back.